Wrapping paper in a pile behind the Christmas tree. Boxes, some intact, others opened in a frenzy scattered across the floor. Bottles of wine still out on the counter. 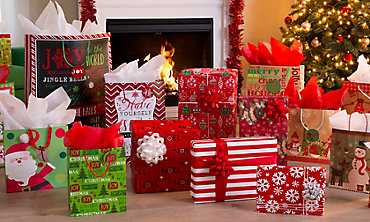 Americans generate 25 percent more waste than normal, or almost 1,000 pounds of waste on average per household during the holidays, according to the Environmental Protection Agency.

Think twice before grabbing a big garbage bag and swooping all of that into the trash, according to John Arwood , CEO of Arwood Waste Jackosnville division.

Most of that holiday mess, about 80 percent, can be recycled or reused, according to the EPA.

“I do like to see the increase in recycling volume, but if we can have another use that’s also a great idea. I’m going through this myself,” John said. “As far as those online retailers go, and getting those boxes out of the house — what can you do with those boxes. Can you reuse them? … Is there any way to reuse gift bags and ribbons and all that stuff that goes along with your packaging from year to year?”

John said he and his wife have a large container in the garage filled with ribbons, bows and other non-recyclable holiday material.

“Ribbons and bows are trouble. We don’t want them in the recycling. If you can reuse it, that’s great,” John said. Same goes for bubble wrap, gift bags, cellophane and packing foam or polystyrene foam.

For the holiday remains that can be recycled, make sure everything is clean and dry before wiping your hands of the task, he said, to ensure that everything actually ends up getting recycled.

Cardboard recycled at AW will have the lengthiest journey. About 2,000 pound bales of cardboard get shipped all the way to China where John said it’s made into other packing material and then often sent back to the U.S. carrying some type of good.

John said he expects to see an uptick of “a couple thousand tons” in the amount of cardboard, paper and glass in the recycling facility until the first couple of weeks of January.

What would it be like to live without plastic? How much waste could we keep out of landfills, waterways and oceans if we all refused single-use … END_OF_DOCUMENT_TOKEN_TO_BE_REPLACED