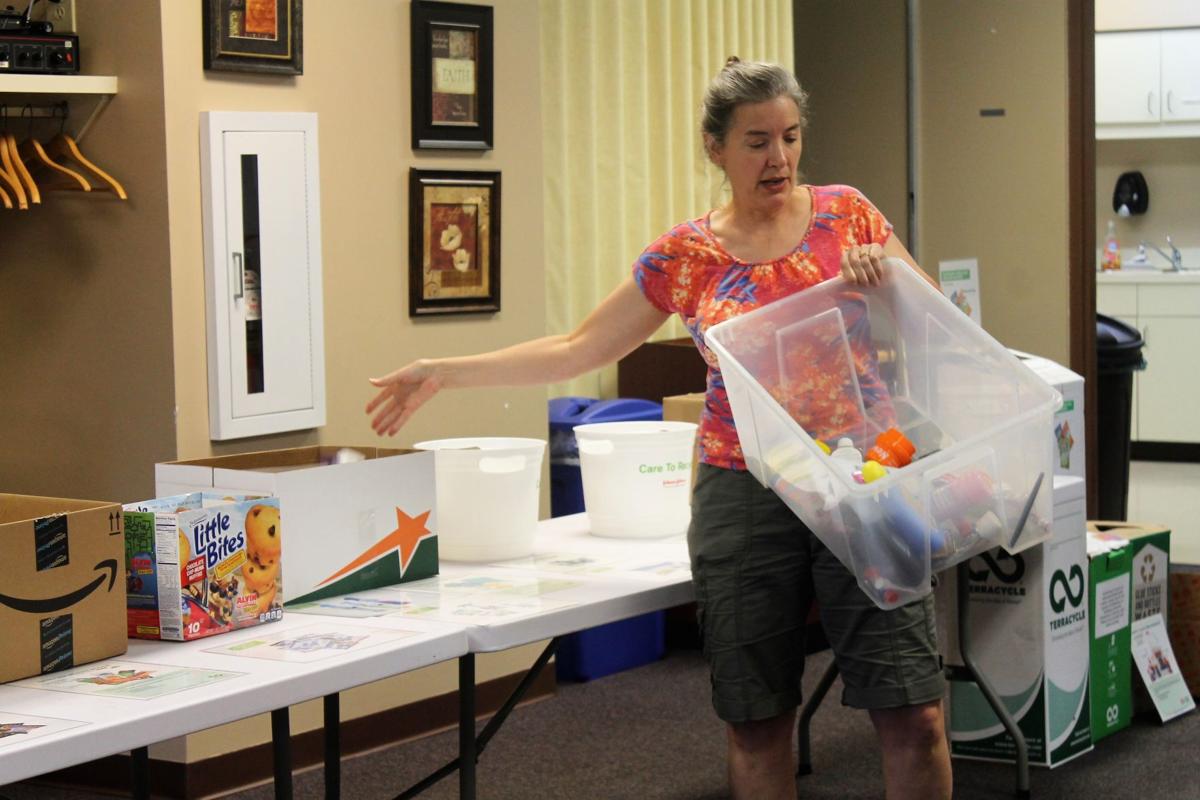 Karen Neder wants your squeezed-out toothpaste tubes, your used-up glue sticks, and your old water filters. By pick-up, drive-by or drop off, she’ll take it all.

Neder, of Rock Island, has been collecting what most would consider to be garbage from the bathroom, office and kitchen, and turning it into cash to support Blessed Beginnings Preschool at Trinity Lutheran Church, 1330 13th St., Moline. Neder says that with help from the Trinity Lutheran congregation, the collection efforts have raised more than $800 for the preschool and diverted 1,000 pounds of potential waste from landfills since 2014 .

The magic in Neder’s alchemy is TerraCycle, a company that collects, reuses, upcycles and recycles hard-to-recycle waste. Founded in 2001, the company’s website says it operates in more than 20 countries to recycle billions of pieces of waste through various means. The collected waste is transformed into sustainable consumer products and used in a variety of industrial applications, and the company is able to donate millions of dollars to schools and charities in the process.

Neder spent a recent evening explaining the process to folks who gathered at Trinity Lutheran Church. While TerraCycle may have been a new concept to the group, Neder’s earth-conscious message often was like preaching to the choir — the group mostly was comprised of University of Illinois Extension Master Gardeners.

Neder also presents to Rotary clubs, church congregations and other groups. She says the mission of TerraCycle is to “eliminate the idea of waste.” To do so, you “join a brigade,” such as the Tom’s of Maine or Colgate campaigns. Then, you collect and sort the items, download a shipping label, stick the items in a box with the label and take it to UPS. TerraCycle covers the shipping, and points are earned based on the weight of the box. The points may then be traded in for cash — in her case, to support the preschool.

The brigades are a great way to “recycle some things that you can’t put into your city bins,” she says. Some of the most successful brigades have been Tom’s of Maine oral care, Colgate oral care, Malt-o-Meal cereal bag, Garnier personal care and beauty, and a snack-bag brigade, Neder says.

According to TerraCycle, the Garnier brigade has recycled more than 9 million items nationally, raising $181,303.

Brigades and company sponsorships change overtime. Neder keeps up with those changes and spreads the word to those who collect the items.

She sent the Master Gardeners home with bag and a list of collection items such as mouthwash, deodorant and toothpaste containers, and caps, pens, mechanical pencils, highlighters, plastic cereal packaging and more stapled to the front.

If no such campaign exists for a particular item, Neder says there are Zero Waste Box programs for items such as alkaline batteries, automotive parts, athletic balls and even action figures. A big box can cost more than $200, but Neder says her household invests in a box for flexible packaging, such as cereal packaging and other similar bags. She does not receive cash when she sends in the Zero Waste Box, but it keeps that trash out of landfills, and a large box will last the family an entire year.

Neder says she has items at her home and the church that are ready for sorting and sending. She says the church provides her space in a Sunday school room to store items, and a group will get together to help sort.

Our consumers care deeply about this issue and by using ocean plastic we hope to show that the opportunities are endless when we rethink our approach to waste.”

Procter & Gamble (P&G) is taking steps to tackle the millions of tonnes of plastic floating in the world’s oceans with the production of a bottle made from 100% waste plastic. As part of the eco drive, P&G will be making 320,000 bottles for its Fairy Ocean Plastic range in conjunction with Terracycle. Available to buy in 2018, the bottles are intended to raise awareness of the colossal amount of ocean plastic pollution. According to Ocean Conservancy, an organisation set up to tackle the issue, eight million tonnes of that ends up in the world’s oceans.

The largest production of its kind in the world, the latest sustainable bottle from P&G – 10% of which contains ocean plastic – adds to the company’s existing commitment to reducing the amount of plastic that makes its way to landfill. P&G has diverted 8,000 metric tonnes of plastic from landfill for use in transparent plastic bottles, using an average of 40% recycled plastic content across the 481 million of transparent bottles it sells.

irginie Helias, vice president of global sustainability at P&G, said the point of Fairy Ocean Plastic was to raise awareness of the “plight of our ocean and the importance of recycling”. “Our consumers care deeply about this issue and by using ocean plastic we hope to show that the opportunities are endless when we rethink our approach to waste,” said Helias.

Terracycle is an ideal choice for the eco-bottle, owing to the fact the company has, since being it was formed in 2001 specialised in working with hard-to-recycle waste – such as Nespresso pods and batteries. Its founder and chief executive officer, Tom Szaky, said it was proud to be working on the project. “The issue of ocean pollution is a pertinent one, we hope other brands will be inspired to think creatively about waste and make the circular economy a reality,” said Szaky

Susan Ruffo, managing director at Ocean Conservancy, said P&G’s involvement is critical to solving the ocean plastic crisis. “They are also addressing the source of ocean plastic by supporting our initiative to raise over $150 million over the next five years to improve waste collection, sorting and recycling in key ocean plastic economies,” said Ruffo.

Somewhere in the region of 300 million tonnes of plastic is manufactured globally every year, with around half of that designed for single-use plastic. Plastic that makes it into waterways and oceans is often consumed by fish and other sea life, which is in turn then consumed by humans. A particularly easily-digestible form of plastic are the microbeads that are used as an exfoliant in beauty products and cosmetics, with potentially tens of thousands of the balls oftcontained in each container.
Greenpeace won a successful campaign to ban their use in the UK by June 2018.

The retailer has also paired with TerraCycle to recycle the used car seats. The two companies teamed up to recycle nearly 80,000 car seats totaling more than a million pounds of material when the program was introduced in April.

Recycling bins for the used car seats will either be in the baby section or the front of the store. Customers will then have until Oct. 7 to redeem the coupons.

Babies “R” Us, which has trade-in events throughout the year at various stores, is also celebrating National Baby Safety Month by offering a discount on car seats throughout September without a trade-in required.

The company is giving a 25 percent discount on most car seats in stores and online through Oct. 1 as well as 10 percent off certain baby safety items. Five percent of the proceeds up to $500,000 is being donated to Safe Kids Worldwide, which is dedicated to protecting kids from unintentional injuries.

There also will be representatives from Safe Kids Worldwide at select Babies “R” Us stores on Saturday offering recommendations on the right type of car seat based on a child’s age, weight and height.

The National Highway Traffic Safety Administration recommends replacing any child’s car seat that has been in a moderate or severe car crash. Car seats also should be replaced if they have passed their expiration date, which can either be found on a label on the seat or by contacting the manufacturer.

Also, if your child’s height and weight are not within the manufacturer’s recommended limits, it’s time for a replacement car seat.

What would it be like to live without plastic? How much waste could we keep out of landfills, waterways and oceans if we all refused single-use … END_OF_DOCUMENT_TOKEN_TO_BE_REPLACED