A new “smart” recycling bin aims to help relieve any confusion. The bin uses computer vision—an algorithm that can “learn” to recognize images much the way the human brain does—to identify the material held in front of its cameras, and then tells the consumer exactly where to place the container.

“People are confused about where to recycle things, and consumers are confused about the actual material the packaging is made of,” says Sajith Wimalaratne, the food and beverage commercial manager at Cambridge Consultants, the British consulting and product development company that created the bin. “There are hundreds of materials out there that look the same, but can’t be recycled in the same ways.”

Wimalaratne and his team envision the smart bins as working like this: a consumer goes to a Starbucks and orders a latte in a paper cup (or a juice in a plastic bottle, or a milk in a carton, etc.). Once he’s finished, he goes up and taps his phone against the bin, registering his identity with the bin app via Bluetooth. He then holds his cup over the bin’s cameras, which take two photos. The computer vision identifies the material and lights up the correct area of the bin. The user then gets a reward via the app. That reward would depend on the bin’s owner or sponsor. In a Starbucks, for example, it could be points towards a free coffee. But it could be anything: charity donations, free merchandise and so on. If the user didn’t want to use the app or register his identity, he could simply use the computer vision to help them know where to toss his cup.

Wimalaratne hopes the bins will help increase rates of recycling, which he describes as “appalling.” In the U.S., the recycling rate is less than 35 percent of all waste (the UK is marginally better, at about 40-45 percent).

Whether or not people recycle has a lot to do with cultural norms, says Chaz Miller, director of policy and advocacy at the National Waste and Recycling Association, a trade association representing private waste and recycling companies.

“Homeowners—residents of single family housing—have adopted the cultural norm of putting their recyclables on the curb on collection day,” Miller says. “However, they are not always doing this right. So while we have created this cultural norm of participating, we still need to do work on recycling right.”

In public spaces and multifamily housing, the cultural norms to recycle are not as strong, Miller says. Where there’s more anonymity, there’s less pressure to participate.

Wimalaratne and his team hope their smart bin will help create a cultural norm around recycling in public spaces, especially when paired with the app. Users, especially millennials, may enjoy the validation they get from recycling and earning rewards. And the team also thinks the bin will appeal to corporations, who are under increasing pressure to be seen as sustainable.

“Brands are wanting to go in this direction to create positive PR for themselves as responsibility for the end of the product life cycle,” Wimalaratne says.

In addition to being in chain cafes like Starbucks, the Cambridge Consultants team envisions bins in public spaces like parks, airports and malls, sponsored by various corporations—Coke or McDonald’s, say, or the mall or airport itself.

It’s a win-win for companies, they say, who could use the bins to gather valuable data about customer habits, whether its individual consumer data gathered through the app, or simply data about how much or what kind of waste is recycled.

Right now the team is taking their bin prototype on the road to trade shows, hoping restaurants or other companies will become interested. Once a company decides to order a bin, it could be manufactured relatively quickly and cheaply, Wimalaratne says.

“It uses off-the-shelf low-cost technologies,” he says. “The most expensive thing is the PC the whole thing runs on.”

Miller thinks technology does have a role in improving recycling, though it’s not as important as the human education element. “Some recent breakthroughs in robotic sorting technologies are particularly promising,” he says. “But the most important challenge remains ensuring you and I are doing it right.”

Read more: http://www.smithsonianmag.com/innovation/smart-recycling-bin-could-sort-your-waste-you-180964848/#R983Ees3gaQ826bW.99
Give the gift of Smithsonian magazine for only $12! http://bit.ly/1cGUiGv
Follow us: @SmithsonianMag on Twitter

Read more: http://www.smithsonianmag.com/innovation/smart-recycling-bin-could-sort-your-waste-you-180964848/#R983Ees3gaQ826bW.99
Give the gift of Smithsonian magazine for only $12! http://bit.ly/1cGUiGv
Follow us: @SmithsonianMag on Twitter

How Do I Recycle 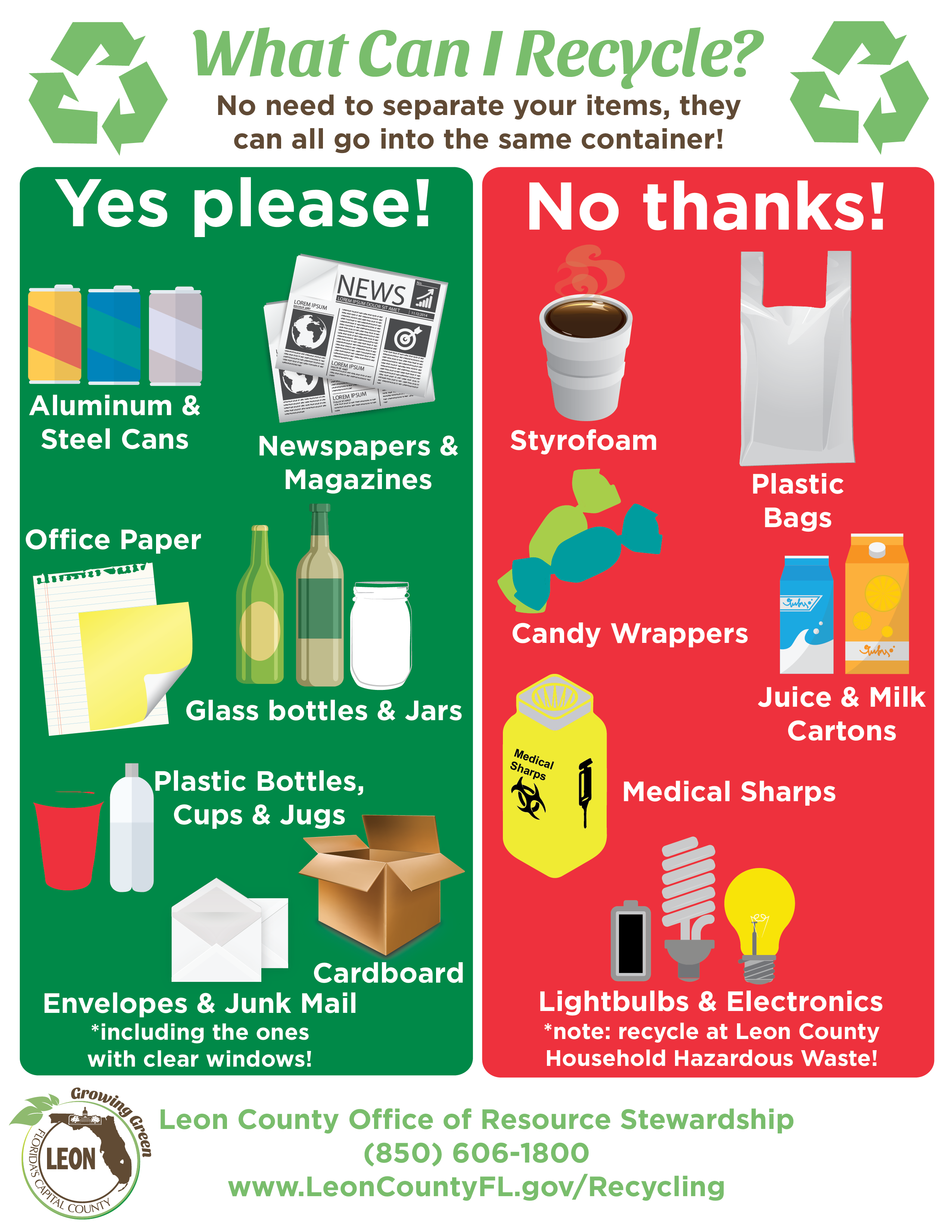 Leon County has single-stream recycling, which means that all recyclables can go in one container. Place paper, cardboard, recyclable steel, aluminum, glass and plastic containers loosely in your recycling bin.

DO NOT put plastic bags or needles in your recycling bin. Read recycling specialty items to find out where to take these.

Please place garbage and recycling carts 3’ apart at the curb, away from mailboxes and power lines. Make sure the wheels and handle are closest to your house. 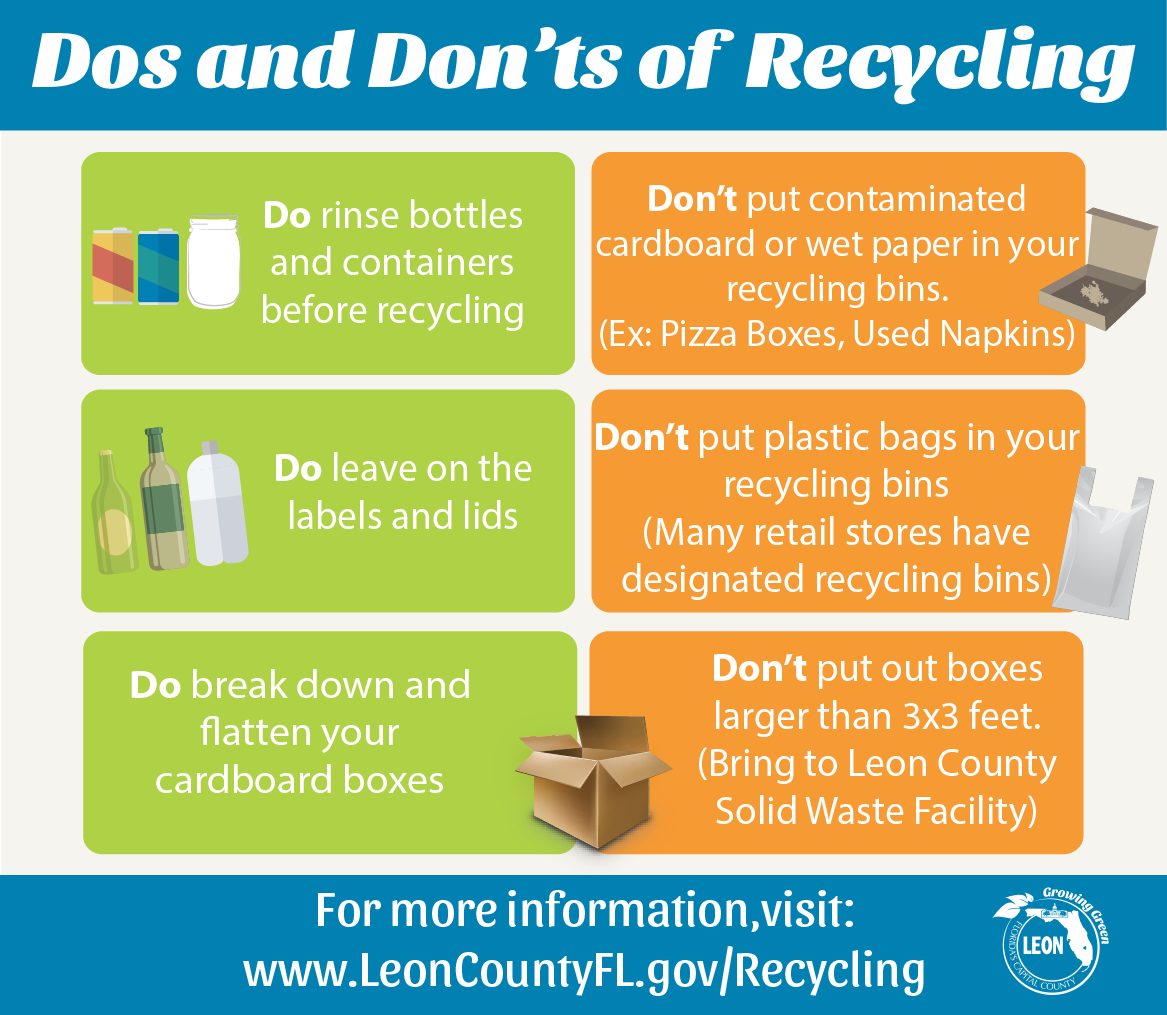 Interested in seeing a detailed list of what can and cannot be recycled in Leon County? Check out our What Can Be Recycled List to see specific items listed by material.

All electronics and household hazardous waste, such as televisions, cell phones, batteries, lightbulbs, cleaning materials, etc., should be taken to our Household Hazardous Waste Facility at 7550 Apalachee Parkway.

Although these items cannot be recycled in Leon County bins, there are other locations that may accept them for recycling.

Medical Sharps: Medical Sharps such as needles, syringes and lancets cannot be placed in your Leon County recycling bin. Residents can pick up a free sharps container from certain Leon County Health Department sites. When the container is full, return the closed box and receive a new one at no charge. Note: Do not put medical sharps in bottles or recyclable items and then put them in the recycling bin. These items can be a very dangerous hazard to workers at the recycling center.

Where Can I Recycle?

Curbside recycling: In unincorporated Leon County, recycling pick-up is done on the same day as your garbage pick-up (if you live in Tallahassee, contact the City of Tallahassee, 891-4YOU or www.talgov.com, for the city pick-up schedule). If you live outside city limits and would like to subscribe to curbside pick-up, contact WastePro at 606-1899.

What Can Be Recycled in Tallahassee?

What can be recycled in Tallahassee?

Plastic containers, metal cans, glass bottles, paper and cardboard items are all recyclable in Tallahassee. Just remove the lids of any plastic, glass or metal container, rinse out (not required but can help keep bugs and smells away) and place in your Recycling Container. Remember to breakdown any cardboard and gift boxes. Download the recycling guide poster.

All plastic containers that hold less than three gallons are recyclable excluding plastic bags and styrofoam. Some examples of recyclable plastics include (but are not limited to):

All glass containers that hold less than three gallons are recyclable. Some examples of recyclable glass items include (but are not limited to):

All aluminum, tin and steel cans that hold less than three gallons are recyclable. Some examples of recyclable metal items include (but are not limited to):

Why should you recycle?

There are lots of reasons why someone should make an effort to recycle as much as possible. Here are some good reasons why you should start making recycling a habit. Download the recycling guide poster.

Contaminants are very costly to the recycling program

When non-recyclable items are mixed with items that are accepted for recycling in Tallahassee, they can contaminate an entire load of recyclables. When it is feasible, these unaccepted items are sorted out at a recycling processor by hand and then taken to the landfill. However, a contaminated load can be rejected by the recycling processor as unusable, and the whole load has to be taken to the landfill. Then, we lose tons of recyclable material due to a small amount of contamination.

View details on what can and cannot be recycled (pdf)

What would it be like to live without plastic? How much waste could we keep out of landfills, waterways and oceans if we all refused single-use … END_OF_DOCUMENT_TOKEN_TO_BE_REPLACED