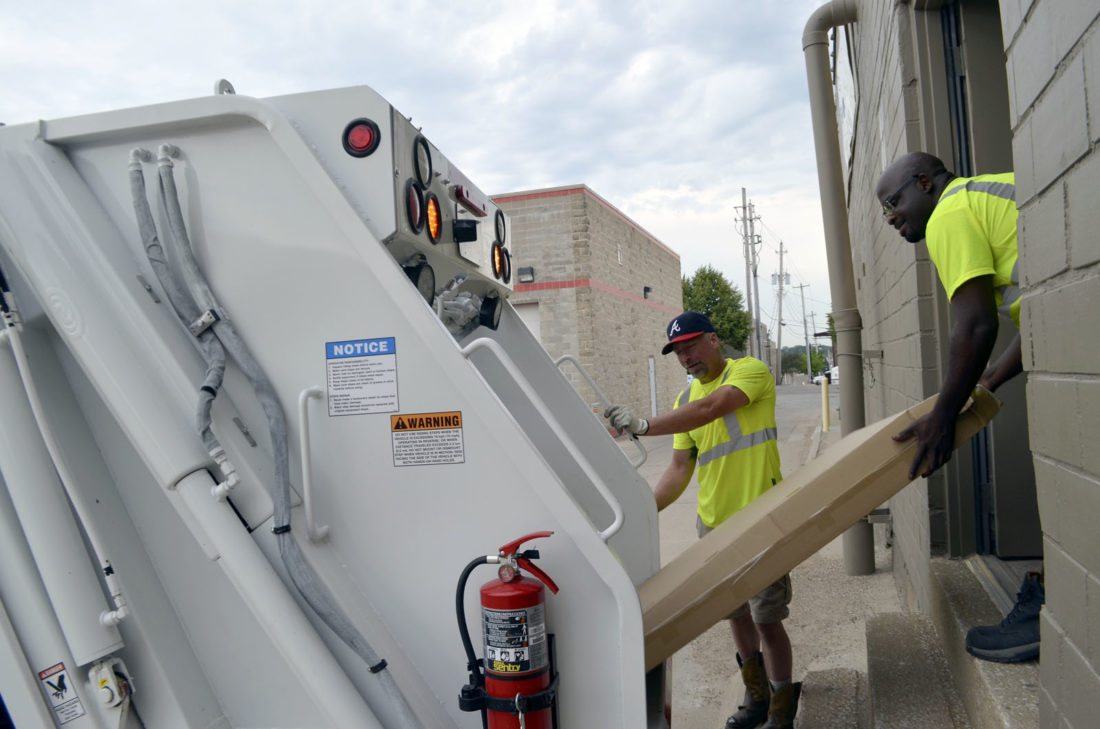 “I think eventually we will have to start charging people,” said Feser. “Eventually we’d like to branch out to the other regions.”

The pick-up route was helpful when the fireworks stands set up shop, Feser said.

“They were throwing everything in the dumpster. We made a point to stop at the fireworks stands and said we’d come pick up this cardboard every day,” he said. “That’s a lot of cardboard.

“The purpose of this truck is instead of cardboard going into the landfill, it’s coming to the recycling center,” he added. “There’s only so much airspace in the landfill, so we try to recycle as much as we can.”

The truck picks up all kinds of plastic — even hard plastic bumpers from automotive shops, he said.

The Ford F-550 chassis, together with the packer body which had to be added, cost about $90,000 altogether, Feser said.

Here’s a list of towns served by the NCIRSWA:

But the white and green vehicle visiting Fort Dodge businesses is the latest effort to increase recycling by the North Central Iowa Regional Solid Waste Agency.

The new recycling truck takes cardboard, paper and plastic back to the regional recycling center south of Fort Dodge, and replaced an ordinary truck which couldn’t carry as much, said NCIRSWA Chief Operating Officer Jeff Feser.

The agency’s had the truck for about a month, Feser said.

“Before, we used a cube truck,” he said. “It seemed like we were coming back here more often. This saves a lot of time.”

What would it be like to live without plastic? How much waste could we keep out of landfills, waterways and oceans if we all refused single-use … END_OF_DOCUMENT_TOKEN_TO_BE_REPLACED